Mama, don’t take my Kodachrome away.  A good deal of the joy of collecting vintage color 35mm aviation slides has been finding rare subjects, finding slides that are well composed and in focus, and the delight in the quality that has been Kodak Kodachrome.  Those red bordered cardboard 2×2 treasures didn’t take long to get me hooked on collecting.  If they were shot with any kind of good camera and by a photography who cared about more than just getting an image, they usually yielded something to be treasured for a very long time.

Around the WWII time frame, Ansco produced a color slide film called Anscochrome as a direct competitor to Kodachrome.  It had a higher speed, and the added attractions to some in that it could be processed by a home hobbyist rather than having to be sent back to the manufacturer for developing, like Kodachrome.

But the darker side of Anscochrome film is something that wasn’t realized until well after Ansco went the way of the dinosaurs.  The stuff wasn’t made to last.  Which is a real downer when you consider just how many irreplaceable memories were entrusted to the film.  At first, colors faded.  Then they shifted to other colors entirely.  Finally, after enough time the color emulsion itself degraded in to eye spots, spider web cracking and finally, just plain let go of the film backing altogether.  I imagine that there are an untold number of these slides and memories still sitting in shoe boxes and loaded slide projector magazines that are stored in overheated attics, frozen garages, and mildewy basements which haven’t seen the light of projection in decades by their owners.  Owners who would be shocked and saddened to find out that Billy’s 3rd birthday or Nanna’s ride on Disney’s teacups is now but a lost wisp of time.

Occasionally I have to see this same thing with old aircraft slides.  Sometimes groups of slides I come across have Anscochrome in them and it is just sad to see how badly they have faired since they were shot.  Especially the rare subjects that themselves are long gone now.  Never again to be seen on an airshow tarmac.  Oh, for a time machine and a satchel full of Kodachrome.

If you are weak of stomach, and cringe at the sight of sacred aircraft desecration, avert your eyes.  This won’t be pretty:

Long before the U.S. Air Force flew stealth anything, they flew their first jet bomber.  The North American B-45A Tornado.  This is the 8th production airframe. 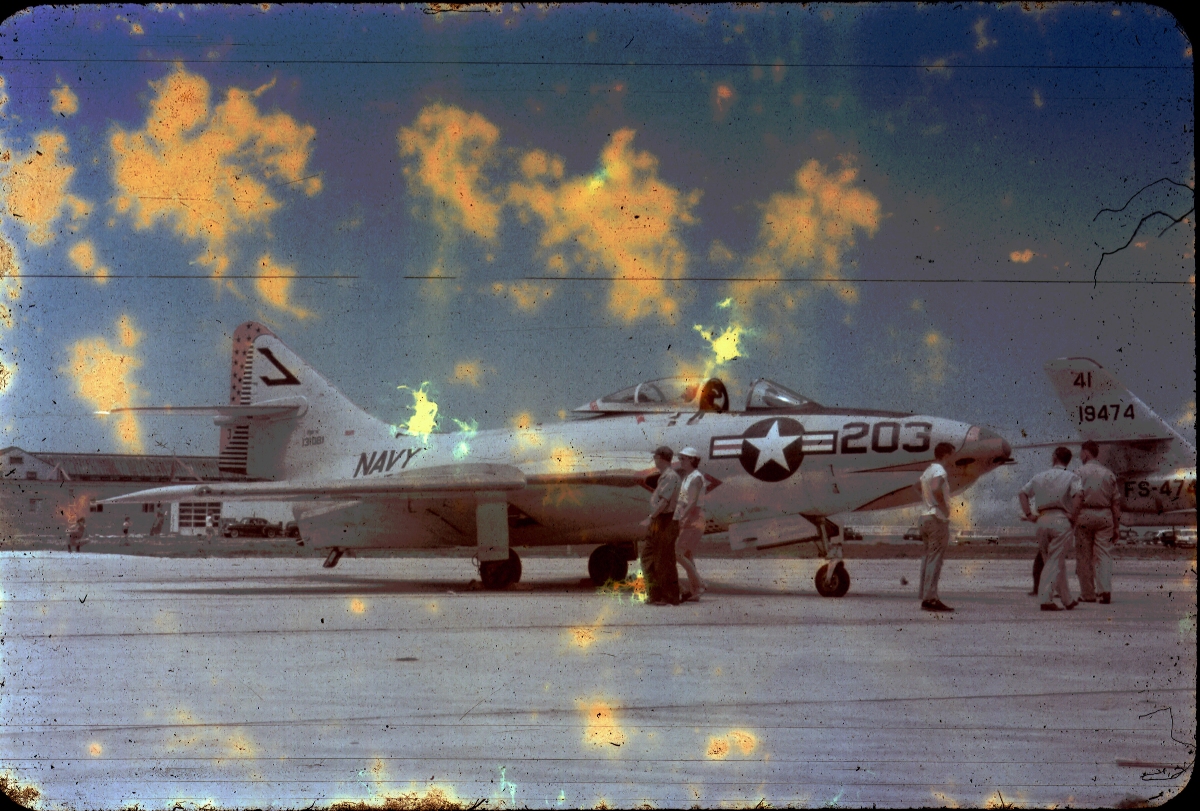 Grumman F9F-6 Cougar.  From back in the day when the Navy was colorful.

Photos of SAC controlled Republic F-84F Thunderstreaks are rare enough.  Having one ruined by orange photo bombing amoebas is hard to take.

And speaking of missiles.  Northrop SM-62 SNARK on a transporter.  SNARK images aren’t so rare, but you don’t see the transporter that often.  Bet that was a nervous ride knowing there was a break-away warhead section sitting right over your tractor cab.

Heartbreaking to see the degredation on these unique slides.  Hurts to see them and think “what might have been”.  Nothing that Photoshop can really fix.  Kodachrome, baby.